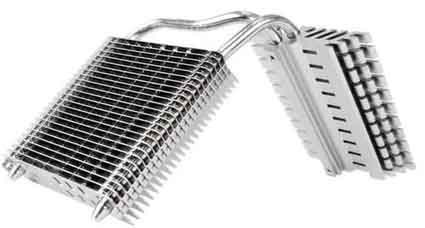 As we all know, the CPU needs a heat sink to keep it at a safe temperature, but VRM has not received the attention it deserves. The heat sink is one of the supporting components. Your VRM, whether single-stage or multi-stage, may require a heat sink to keep it within the correct operating temperature range.
In a VRM built with discrete components, if you decide to use a VRM heat sink for temperature regulation, you will encounter some difficulties. In VRM ASIC, the design of the chip itself determines whether a VRM heat sink is needed. If any type of VRM design is reasonable, unless you decide to overclock the GPU, you will not need to take improper thermal management measures.
When to use a VRM radiator
The topic of when to use a VRM cooler is very interesting. This depends on many factors, including the discrete components used on the circuit board, the thermal conductivity of the PCB substrate, whether there are any other active cooling measures, and whether a single-stage or multi-stage VRM is used. Let us quickly remember how VRM works and where heat is generated.

VRM is usually implemented as a buck converter, so it uses a PWM signal with a low duty cycle to switch the power MOSFET. Use a large capacitor to adjust the output voltage between two levels. A single-stage VRM contains two MOSFETs, while a multi-stage VRM contains two MOSFETs per stage. The MOSFETs in each stage are continuously switched, and then the regulation level in the LC circuit is modulated at the output of the VRM.

If you look at a typical power MOSFET, you will see a large metal pad on the back of the component. This is the heat sink of the MOSFET. I have seen some designers connect custom heat sinks directly to these pads to provide heat dissipation.

Once placed on the board, the power MOSFET will tilt downward, which means that the MOSFET heat sink is directly against the board. Usually, these boards are soldered to copper heat-dissipating pads, so that heat flows through the heat-dissipating holes to the back of the board. Most of the heat will accumulate on the pad, and placing the MOSFET pad against the board means that the board itself acts like a heat sink. If the computer motherboard is exposed and the VRM MOSFET is found, try to power on the computer and wait for the system to heat up. You will find that the back of the board is very hot.

In the example shown above, the top surface of each MOSFET is insulated, so very little heat flows away from the circuit board, so no additional heat sink is needed on top of these components. Some manufacturers still add heat sinks to the surface of the components for decoration. Some modern VRMs are designed so that the thermal pad of the MOSFET is on the top surface, which is mainly used for GPUs. On these servers, a heat sink is essential because these VRMs will not use the motherboard as a heat sink.

If you really need to cool each stage of a multi-stage VRM together, you can use a shared heat sink across all components. This requires placing a pad at each stage (on the back of the board or on the top of the component) and connecting a larger heat sink between all stages of the VRM. This is used in the VRM of some high-performance graphics cards. If you overclock the system, this feature is definitely recommended.
Finally, there are some digital and analog VRM controller ICs on the market. Some of these ICs can support 6 levels in a multi-level VRM to provide a very smooth output voltage. These ICs also generate a lot of heat, and the heat sink installation strategy outlined here also applies to these ICs.
It can be difficult to build a layout using a VRM heat sink. But when you use the correct PCB design and analysis software, you can easily lay out the VRM and add any required heat sinks.
Recommendation information
Recommended products