How to choose the right heat sink?

The heat sink is very important! An important aspect of circuit design is that they provide an effective heat transfer path that can transfer the heat of electronic devices (such as BJTs, MOSFETs, and linear regulators) to the ambient air.
Their function is to create a larger heat dissipation area on the heating device, and in doing so, it can more effectively transfer heat out and into its surrounding environment. Improving the thermal path outside the device can reduce the temperature rise at the device connection.
The purpose of this article is to provide a high-level introduction to the problem of selecting a heat sink and to obtain thermal data from it. Equipment application and specifications provided by the radiator provider.

Does the appliance need a radiator?
For the purpose of this article, we assume that the problematic application is a transistor in a TO-220 package with conduction and switching losses equal to 2.78W of power consumption. In addition, the ambient operating temperature will not exceed 50°C. Does this transistor need a heat sink? 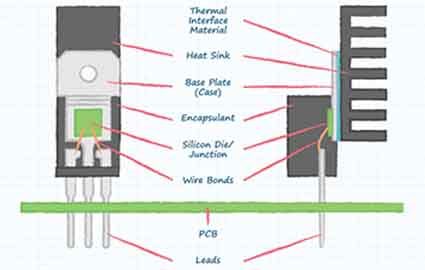 Figure 1: Front and side views of a typical TO-220 package with heat sink

First, it is necessary to assemble and digest all the features of thermal resistance that may prevent 2.78W from being scattered into the ambient air. If they cannot be effectively dispersed, the junction temperature in the TO-220 package will exceed the recommended operating requirements, which is usually 125°C for silicon.

Under normal circumstances, the transistor supplier will record any junction-ambient thermal resistance, which is represented by the symbol RθJA and measured in °C/W. For each unit of power (watt) consumed in the device, this unit represents the amount by which the junction temperature is expected to increase above the ambient temperature around the TO-220 package

Put it in context. Transistor suppliers have proved that the junction-to-ambient thermal resistance is 62°C/W, and the 2.78W power dissipation in the TO-220 package will increase the junction temperature to 172°C above the ambient temperature;
The calculated value is 2.78Wx62°C/W. If the worst-case ambient temperature of the device is assumed to be 50°C, the junction temperature will reach 222°C, and the calculated temperature is 50°C+172°C. Since this far exceeds the rated silicon temperature of 125°C, it is likely to cause permanent damage to the transistor. Therefore, a radiator is absolutely needed.
Connecting the heat sink to the application will significantly reduce the thermal impedance from the junction to the environment. In the next stage, determine how low the thermal impedance path is required to provide safe and reliable operation.

Figure 2: Graphical representation of the thermal resistance that should be calculated and added between the junction and the junction. The ambient air in a typical TO-220 application.

In the graph in Figure 2, it can be seen that the first thermal impedance required is "junction to shell", which is represented by the symbol RθJ-C. This shows how easy it is for heat to transfer from the heat-generating junction to the surface of the device, denoted as TO-220 in this example. Usually, the supplier's data sheet will list this impedance and the junction-to-environment value. Here, the assumed thermal impedance rating of the junction case is 0.5°C/W.
Represented by the symbol RθCS, the required second thermal impedance is "case to groove", a is a measure of how easily the heat is transferred from the housing of the device to the surface of the radiator. Since the two surfaces sometimes have irregularities, it is usually recommended to use a thermal interface material (TIM or "thermal compound") between the surface of the TO-220 housing and the heat sink base. From a thermal point of view, they are fully engaged. The application of TIM will significantly improve the heat transfer from the TO-220 surface to the heat sink, but its related thermal impedance must be considered. 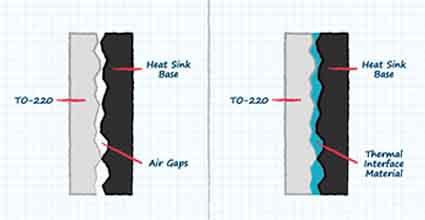 Generally speaking, TIMs are characterized by their thermal conductivity, measured in watts per meter-degree Celsius (W/(m°C)) or watts/meter-Kelvin (W/(mK)). In this example, Celsius and Kelvin are switchable because both use the same temperature measurement increase, where the rise and fall of temperature are calculated; for example, a temperature rise of 45°C is the same as a temperature rise of 45K.
Since the impedance of the TIM depends on the thickness ratio (TIM), the unit in meters is included. The thickness of the entire area (in meters) (the area covered by the TIM, in meters 2), is 1/m (calculated as m/m2 = 1/meter). In this example, a thin layer of TIM is applied on the metal label area on the surface of the TO-220 housing, with the following specific properties and application details:

Using the properties listed above, you can use the following formula to calculate the thermal impedance of the TIM, and use a meter to ensure consistency:

Choose a heat receiver
The last thermal impedance required is "absorbed into the environment", which is represented by the symbol RθSA. This calculation reveals how easily heat is transferred from the bottom of the radiator to the surrounding ambient air. Electronic component manufacturer CUI is a radiator supplier and provides the chart shown in Figure 4. To demonstrate how heat is easily transferred from the radiator to the ambient air through different airflow loads and conditions. 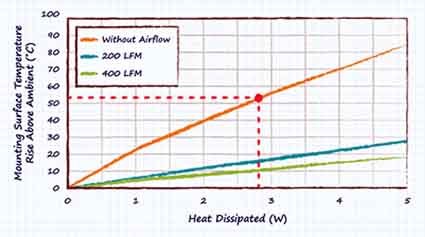 In this example, it is assumed that the equipment is operating under natural convection conditions without any airflow. This graph can be used to calculate the final thermal impedance of this particular heat sink, which is absorbed to ambient temperature. The amount by which the surface temperature rises above the ambient temperature is divided by the amount of heat dissipation to obtain the result of the thermal impedance under that specific operating condition. Here, the dispersed heat is 2.78W, causing the surface temperature to rise above the ambient temperature of 53°C. Dividing 53°C by 2.78W will result in a thermal resistance absorbed into the environment of 19.1°C/W.

In the previous calculations, the maximum allowable impedance between the junction and ambient air is 27°C/W. Subtracting the impedance from the junction to the case (0.5°C/W) and the impedance from the case to the absorber (0.45°C/W) results in the maximum tolerance of the heat sink, which is calculated as 26.05°C/W; the calculated result is 27 °C/W-0.5°C/W-0.45°C/W.
For this example, under these assumptions, the thermal resistance is 19.1°C/W. This heat sink is much lower than the 26.05°C/W tolerance calculated earlier. This translates into a cooler silicon junction temperature inside the TO-220 package and a wider thermal margin in the design. In addition, the maximum temperature of the junction can be approximated by adding all the thermal impedances together, then multiplying them by the watts consumed at the junction, and finally adding the result to the maximum ambient temperature, as shown below:

The example demonstrated here reveals the importance of heat sinks in application thermal management. If the heat sink is omitted, the silicon junction in the TO-220 package will greatly exceed the design rating limit of 125°C. The process used here can be simply modified and repeated to help designers choose the right size heat sink for various applications.

in conclusion
Heat sinks have an important role in circuit design because they provide an effective way to transfer heat to the ambient air and away from electronic equipment. By identifying the highest temperature of the surrounding environment and the power consumed in the device, the radiator selection can be optimized; it is neither too small nor causing burnout, nor too large to waste money. In addition, consider the important role of the TIM in effectively and uniformly transferring heat between the two surfaces.
Finally, once the application parameters-ambient temperature, power consumption, and thermal impedance path are defined-review CUI's board-level heat sink product portfolio to determine the model that fits the cooling needs of the project.
Recommendation information
Recommended products